The Triumph Mine site was a lead, zinc, and silver mine located in central Idaho near the unincorporated town of Triumph. Mining and milling operations took place from the late 1800s until the 1950s.

Mining practices used at the time left high levels of heavy metals in soils and water that required cleanup. Today’s mining practices are designed to prevent this type of contamination. 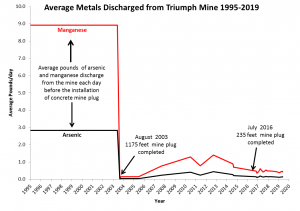 Cleanup began in 1998 and was designed to reduce the public health risk.

In 1993, EPA proposed listing Triumph Mine as a Superfund site. Due to community opposition, EPA and DEQ agreed to a Memorandum of Agreement (MOA) in 1994 that deferred cleanup oversight to DEQ.

The Idaho Department of Lands (IDL) and Asarco Incorporated were identified by EPA as potentially responsible parties for the presence of contamination at the site. IDL’s responsibility is related to a 1922 easement granted to the Federal Mining and Smelting Company, owned by Asarco, to store tailings on state-owned endowment lands.

Asarco and IDL entered into a legal agreement with DEQ to determine the extent of the contamination and develop cleanup options. DEQ prepared a Record of Decision describing the proposed cleanup plan, which was approved in 1998 after public review and input.

In 1999, Asarco and IDL entered into a second legal agreement with DEQ to complete the cleanup. Under the agreement, IDL would have no responsibility for financing or performing work related to the Triumph Mine tunnel.

Cleanup started in 1998 and was mostly complete by 2004 (see Fourth Five-Year Review).

In 2003, EPA withdrew the proposal to list Triumph Mine on the Superfund list, based on DEQ fulfilling its obligations under the 1994 MOA.

During remediation, Asarco was unable to meet financial obligations and, in 2003, money from an Asarco settlement was made available. Using settlement funds, Asarco installed the first Triumph Mine tunnel plug in 2003 to control the mine water discharge.

Asarco filed for bankruptcy in 2005 and, in 2009, entered into a bankruptcy agreement with the federal government and several states. DEQ and IDL received $1.675 million and $1 million, respectively, and DEQ became responsible for performing the work related to the Triumph Mine tunnel.

Using the settlement funds, DEQ completed several remediation projects to address the water discharging from the mine, including the installation of the second plug. IDL completed additional work to ensure the continued protectiveness of the soils cleanup.

Settlement funds for long-term operations and maintenance are limited. In 2019, the legislature appropriated $1.5 million for ongoing cleanup activities.

The Triumph Mine site will undergo a review every 5 years to evaluate the cleanup and determine if the actions taken are protective of human health and the environment (see Fourth Five-Year Review). Although the cleanup was designed to be a permanent solution to address contamination at the site, additional measures are required to maintain long-term protectiveness:

The 1998 Record of Decision for remediation of the Triumph Mine site called for the implementation of Community Protection Measures (CPM) to ensure the Triumph Mine site remains protective of human health. Because all of the contaminated soils could not be removed from some areas of the site, CPMs are needed to ensure that the contaminated soils do not become an unacceptable health risk.

The Triumph CPM describes procedures property owners should take to safely handle and dispose of contaminated soils if encountered as part of an excavation project on their property. The CPM also applies to nonresidential properties in the Triumph area that may contain contaminated soils.

An environmental covenant (EC) was the real estate instrument selected for the implementation of the Triumph CPM. An EC is commonly used as a component of a risk-based cleanup. They are designed to control potential risks posed by residual contamination, protect the integrity of the cleanup action, and ensure continued protection of human health and the environment.

An EC is recorded at the county assessor’s office and is attached to the deed for the property. ECs provide the CPM to current and future property owners and disclose cleanup information to real estate agents and lenders. For questions about CPM and to determine if an EC is appropriate for your Triumph property, contact our staff listed below. See an example of an Environmental Covenant.